Round Two!! (Table of Contents) 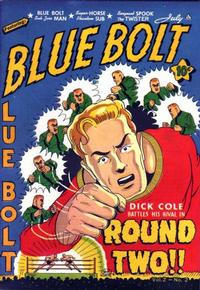 Printed on inside front cover.

The Clash! --Between Wonder Boys! (Table of Contents: 2)

First Line of Dialogue or Text
Furnaces roar and dynamos hum...
Genre
superhero
Characters
Sub-Zero; Captain Ronson (of Naval Intelligence); Bart Neill (business agent of the torpedoe workers union, death); R. V. Prentiss (head of the arms company); Mr. Ketler (villain, foreign agent); Ketler's gamg (villains)
Synopsis
U. S. Naval Intelligence enlists the aide of Sub-Zero to investigate the disappearance of two radio-controlled torpedoes from the Prentiss Naval Arms Company. They witness the murder of the Torpedo Union's business agent, but soon a member of the union reveals himself to be the killer of Neill and Sub-Zero rounds up the agent and his gang posthaste.
Reprints
Keywords
Prentiss Naval Arms Company

The Case of the Zombies and the Crazy Doctor Zorka (Table of Contents: 4)

First Line of Dialogue or Text
It seems that Odysseus, in his travels (according to Greek mythology)...
Genre
superhero
Characters
The Twister [Bob Sanders] (origin retold); Odysseus; Aeolus (god of the winds); Pete Sanders (Bob's father)
Synopsis
According to Greek mythology, Odysseus visited Aeolia, seeking out Aeolus to provide favorable winds for his ship. His wish was granted, but Aeolus also gave Odysseus a sealed bag of unfavorable winds and was told not to open it....but he did, and the winds blew his ship back to Aeolia. Aeolus was furious and demanded that Odysseus tracked down and capture the bad winds or reap the consequences...but he never did. Bad winds one day hit a red school house in Windy Gap and a student, Bob Sanders, was taken up in it and given strange powers, which he used as The Twister.
Reprints
Keywords
Island of Aeolia; Windy Gap

Bob Sanders/The Twister is considered a descendant of Odysseus.

Script credit courtesy of the Who's Who.

Art revision from Ray Gill to Gustavson per Who's Who and Paul's son, Terry Gustafson, all added by Craig Delich.

First Line of Dialogue or Text
The office of Tony the Tornado -- notorious New York taxi-cab racketeer...
Genre
superhero
Characters
The Twister [Bob Sanders]; Mr. Norton (cab company owner, introduction); Tony the Tornado (villain, taxi-cab racketeer); Tony's gang [Mugsey; rest unnamed](villains, introduction for all)
Synopsis
Tony is furious as he reads the conclusion to the Twister story in Blue Bolt Comics Volume 2 #1, and decides to do kind deeds so that the Twister will like him. Suddenly the Twister appears and gives the whole gang a lesson they'll never forget and gives fair warning to them for the future. But Tony won't listen and attempts to use his cabs to damage those of his rival cab owner. Twister visits Tony again and gets vital information linking the racketeer to the deeds and turns it over to the Police.
Reprints
Keywords
Air Gun; Norton Cab Company

First Line of Dialogue or Text
The captain says to ask you if you'll join him at lunch...

First Line of Dialogue or Text
The White Rider and Clous, the Superhorse...raised in a mysterious hidden valley...

First Line of Dialogue or Text
Along the New England coast are situated many industries...

Ad for a wallet printed on inside back cover.