"Movie Classic" on cover. Adapted from the 1958 movie "Le Fatiche di Ercole", translated into English and released in the United States in 1959 as "Hercules".

No month is given on the cover or in the indicia. Based on the copyright dates of this issue and others in the series released around the same time, one can determine that this issue was published with other Four Color issues bearing a "July-September 1959" cover date. 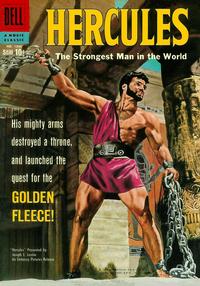 Inside front cover; black and white. Five stills from the movie plus partial cast and credits list.

Genre
historical
Characters
Hercules; Princess Jole; Ulysses; Jason
Synopsis
Subject to a tyrant king's commands, Hercules must endure many tests of strength then sail in search of the Golden Fleece. Finally, he must overthrow the evil monarch's rule in order to restore the rightful king to his throne.

Adapted from the 1958 Italian movie "Le Fatiche di Ercole", released in the United States in 1959 as "Hercules". Synopsis is taken from sequence one of this issue. Script credit from Robin Snyder, taken from Paul S. Newman's personal records. (August 4, 2007).

Genre
non-fiction
Synopsis
Facts about the equipment and strategy used by the Greeks in war.

Inside back cover; black and white. Pencils and inks credits for this sequence from Alberto Becattini (May 14, 2007).

The Labors of Hercules (Table of Contents: 4)

Genre
historical
Characters
Hercules; Atlas (cameo)
Synopsis
Some of the 12 labors of Hercules from the Greek myths.

Back cover; color. Pencils and inks credits for this sequence from Alberto Becattini (May 14, 2007).