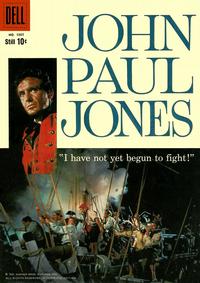 Inside front cover; black and white. Five photos and partial cast and credits list from the movie.

Genre
historical; war
Characters
John Paul Jones; Patrick Henry; John Hancock; George Washington; Benjamin Franklin
Synopsis
Born is Scotland, John Paul goes to sea at the age of 12. Later, as a ship's captain, he puts down a mutiny, but kills the ringleader. He must flee to Virginia where he changes his name to John Paul Jones. Through Patrick Henry he becomes involved in the Continental Navy of the American Revolution. After a number of battles near the colonies, he goes to France to see Benjamin Franklin and from there makes a raid on the English mainland. Later he is given a ship from France to attack the Baltic fleet. This leads to the famous Bonhomme Richard vs. Serapis sea battle.

Last panel is Dell's "A Pledge to Parents". Adapted from the 1959 movie "John Paul Jones". Romantic subplot described in the preview sequence does not appear in the story. Script credit for this sequence from Alberto Becattini (May 14, 2007)

Inside back cover; black and white. Script, pencils, and inks credits for this sequence from Alberto Becattini (May 14, 2007)

Historic Flags of the Revolutionary War (Table of Contents: 4)

Back cover; color. Script, pencils, and inks credits for this sequence from Alberto Becattini (May 14, 2007)