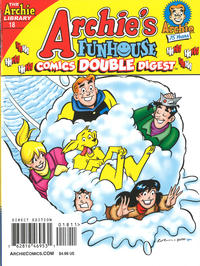 Too Pooped Pop (Table of Contents: 1)

The Master Mind (Table of Contents: 3)

The Big Surprise! (Table of Contents: 5)

Genre
teen
Characters
Archie Andrews; Reggie Mantle; Veronica Lodge
Synopsis
Archie is as inept on an indoor practice slope as he is on an actual one.
Reprints

Genre
teen
Characters
Moose Mason; Dilton Doiley
Synopsis
Dilton tells Moose to put his money in a bank so it will grow.
Reprints

Breaking up Is Hard to Do! (Table of Contents: 17)

The Intruder (Table of Contents: 18)

A Super Effort (Table of Contents: 22)

Going Down the Slopes (Table of Contents: 27)

Genre
humor; teen
Characters
Archie Andrews; Reggie Mantle; Veronica Lodge (cameo); various un-named Riverdale High students
Synopsis
Archie and Reggie are again campaigning for a school office of some sort. They're both in an auditorium, and Archie is at the podium, with Reggie seated nearby. Archie tells his fellow students that if they don't like Reggie as a candidate, then they should vote for him. He continues with "A vote for Archie is a vote for", and in the last panel is interrupted by Reggie, who says "For someone you'll like even less!"
Reprints

Half-page strip. Occupies the top half of the page. Bottom half is occupied by "Jab Confab".

Genre
humor; teen
Characters
Reggie Mantle; Moose Mason; Midge Klump
Synopsis
Reggie, Midge and Moose are at a dance or night club, and Midge is showing Reggie some disco moves, which of course makes Moose mad. Moose says his fists can't make up their mind - they both want to take the first poke at Reggie.
Reprints

This occupies the bottom half of the page, with "Vote Gloat" occupying the top half.

Believe It or Not (Table of Contents: 33)

Big Gig or In the Knick of Time (Table of Contents: 35)

Archie as the Soda Jerk (Table of Contents: 38)