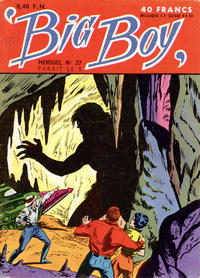 Genre
criminel (crime); fantasy (fantasy-supernatural)
Characters
Brad Horton
Synopsis
Brad Horton has stolen $150,000 in marked money. He jumps from a train into some woods looking for a place to bury the money until it is safe to spend. He trips and falls into an old well. He wishes he never left the train and suddenly finds himself back there. Leaving the train again he finds his way back to the well where a stone tells him that wishes cost a nickel. He wishes for a million dollars and uses this to buy up the well and surrounding land. Officials visit and want to know the source of his wealth. He makes a wish to escape but the nickel is fake and he is arrested.
Reprints

Following discussion on GCD Main, inker changed to George Roussos with a query on Meskin as inker. Meskin and Roussos had a collaborative relationship from the 1940s onwards (information from Lambiek).

Character from English language original. May be different in French reprint.

First line from English language original: "If you'd have told me some time ago I'd find a wishing well that actually worked, I'd have laughed at you."

Genre
fantasy (fantasy-supernatural)
Characters
Dean Hall; Orry Kane; swami [Jones]
Synopsis
Dean Hall and Orry Kane are on a trip in Bengal. Kane tries again to persuade Hall to sell him his theater, Hall again refuses. They enter a village and see a swami who predicts an elephant stampede. The square is emptied just in time. A month later Hall auditions acts for his theater when the swami appears on stage. He makes two predictions which comes true. Later the swami is asked to appear at the theater and he says he will not enter as it will be struck by a meteor. Hall sells the theatre to Kane and leaves. The swami is then revealed to be a fake. Then a meteor hits the theatre.
Reprints

Characters from English language original. May be different in French reprint.

Title from English language original: "The Swami of Broadway"

First line from English language original: "From the mysterious jungles of Bengal to the glittering lights of an American city came the Swami--bringing with him a magic emerald possessing the power to unlock the forbidden secrets of the future!"