Harris confirmed as editor per his biblio in Robin Snyder's The Comics!, Vol 29, No.5, May 2018. Previous indexer credited Chase Craig or Del Connell as editors.

Darby O'Gill and the Little People (Table of Contents) 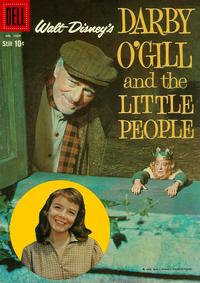 Darby O'Gill and the Little People (Table of Contents: 1)

Darby O'Gill and the Little People (Table of Contents: 2)

A Word about Leprechauns (Table of Contents: 3)