The Biggest Show in the World! (Table of Contents) 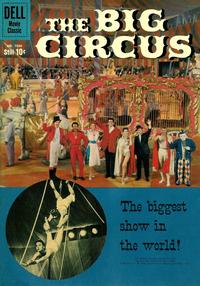 Inside front cover; black and white. Five photos from the movie with typeset text. Partial cast and credits are listed.

The Big Circus (Table of Contents: 2)

Characters
Hank Whirling; Randy Sherman; Helen Harrison; Zach Colino; Mama Colino; Tommy Gordon; Hans Hagenfeld; Skeeter the clown; Jeannie Whirling
Synopsis
When Hank Whirling wants to borrow $500,000 to operate his circus, the bank approves on the condition that their loan officer accompanies the circus on tour to oversee spending. The loan officer also hired a pretty female press agent over Whirling's objection. The show is plagued by disasters and everyone in the show becomes a suspect.

Genre
non-fiction
Synopsis
Facts about how food is served at a circus.

Back cover. Panels with typeset text underneath.