This issue is a variant of Aquaman (DC, 2011 series) #49. There exist further variants. 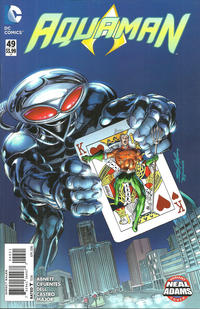 Rising to the Surface (Table of Contents: 1)

The monster killer who appears from water is not named in this issue, he is identified as Dead Water in issue #50. We can not see what he looks like in this issue, we can only see his clawed hands. In issue #51, we learn that his real name is Jonah Payne.

On the final page of the story, Mera dons a costume similar to Aquaman's and is referred to as Aquawoman in issue #50.