Though DC credits the inking of at least the main figure to Al Plastino in the Superman in the Sixties reprint, when asked in February 2009 by Bryan Stroud, Plastino said he was "pretty sure" the entire cover was inked by Stan Kaye. 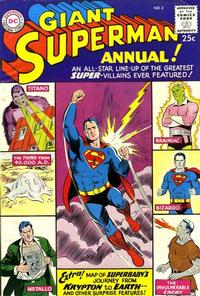 The Invulnerable Enemy (Table of Contents: 2)

The Menace of Metallo! (Table of Contents: 3)

Genre
superhero
Characters
Superman; Lois Lane; Metallo [John Corben] (intro, villain); Professor Vale; Perry White; Jimmy Olsen
Synopsis
Criminal John Corben, who is nearly killed in an auto accident, is given a robot body powered by uranium. When he is hit by bullets meant for Lois, she assumes he is really Superman. Recognizing a good idea, Corben impersonates Superman to collect more uranium. Running out of sources of uranium, Corben learns that he can also be powered by kryptonite. But he doesn't realize that the kryptonite he steals is fake, prop kryptonite and collapses.
Reprints

Titano the Super-Ape! (Table of Contents: 4)

Genre
superhero
Characters
Superman; Titano (intro, villain, origin, formerly Toto); Lois Lane
Synopsis
Lois befriends the intelligent chimp Toto just before he is sent into orbit inside a satellite. While in orbit, the satellite passes by a collision of a uranium metorite with a kryptonite one, which causes the chimp to grow to enormous size and shoot kryptonite beams from his eyes. Because of this change, Lois re-names him Titano. Though not meaning any harm, Titano poses a threat to humanity and Superman, so the army traps the giant chimp, planning to execute him. But Lois devises a way to block Titano's kryptonite vision so Superman can send him into the past where he cannot harm anyone.
Reprints
Keywords
green kryptonite

Genre
superhero
Characters
Superman; The Thing from 40,000 A.D. (intro, villain, death); Lois Lane; Perry White
Synopsis
A protoplasmic being appears in Metropolis with the power to assume any form - including Superman's, complete with super powers, this inevitably results in a super-showdown with the Man of Steel.
Reprints

The Thing of Steel, Chapter I: The Amazing Bizarro (Table of Contents: 8)

[The Thing of Steel,] Chapter II: The Runaway Super-Creature (Table of Contents: 10)

Genre
superhero
Characters
Superboy; Bizarro #1; Martha Kent; Melissa
Synopsis
Superboy attempts to subdue Bizarro with green kryptonite, but discovers that he is immune to it, he then uses a dummy of Melissa to lure dim witted Bizarro into a military trap.
Reprints
Keywords
green kryptonite

[The Thing of Steel,] Chapter III: The Battle with Bizarro (Table of Contents: 12)

Genre
superhero
Characters
Superboy; Bizarro #1; Melissa
Synopsis
The army cannot stop Bizarro but his will is sapped when he realises that blind Melissa only likes him because she cannot see his face. Superboy finds his imperfect duplicate's one weakness but the desperately unhappy Bizarro goes meekly to meet his fate, the resulting explosion restoring Melissa's sight. Superboy wonders if Bizarro knew that his demise would cure Melissa's blindness.
Reprints
Keywords
green kryptonite (flashback); Krypton (flashback)

Vote for the Next Giant Superman Annual Now! (Table of Contents: 13) (Expand) /

How the Super-Family Came to Earth from Krypton (Table of Contents: 14)

The Super-Duel in Space (Table of Contents: 15)

Genre
superhero
Characters
Superman; Brainiac (intro, villain); Lois Lane; Koko; Professor Kimda (intro); Jonathan Kent (flashback); Martha Kent (flashback); Superbaby (flashback); Superboy (flashback)
Synopsis
While on an experimental rocket, Clark and Lois encounter the alien Brainiac, who plans to shrink and bottle the great cities of Earth and then use them to repopulate his planet. Superman gets inside Brainiac’s ship when the villain snatches Metropolis and there finds a bottle with the Kryptonian city of Kandor. He enters the bottle and with the help of a scientist there restores the cities of Earth while Brainiac lies in suspended animation for his trip home. Because there is not enough power to restore Kandor, Superman places the city in his Fortress, as Brainiac rockets away empty-handed.
Reprints
Keywords
Fortress of Solitude; Kandor (intro); Krypton (flashback)

1st appearance of Brainiac and Kandor

Inside back cover. Not from the first Superman story (in Action Comics #1) as stated.

Look Inside for the Super-Stories Featured on These Covers! (Table of Contents: 17)