More Adventures Of Those Lovable Peanuts (Table of Contents) 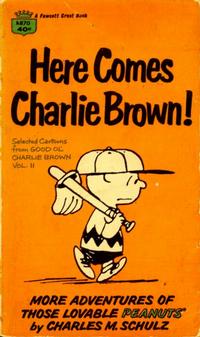 Genre
humor; children
Characters
Charlie Brown; Lucy
Synopsis
Spread out over 3 pages, Charlie Brown hits practice a baseball to Lucy only to have it hit her on the head.

This may not be a daily reprint, but an original drawing for the title page. It is 5 panels long where as the rest of the daily sequences are only 4 panels long.

The artwork was edited to include stylized design elements that help incorporate the strip panels together.

For Readers Who Want To Get In With The Right Crowd... (Table of Contents: 4) (Expand) /