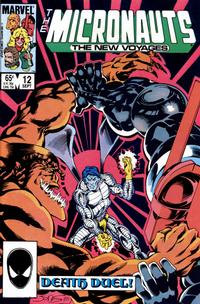 Descent Into the Maelstrom! (Table of Contents: 2)

Genre
science fiction; superhero
Characters
Bug; Prince Acroyear; Marionette; Huntarr; Microtron; Biotron; Solitaire; Scion (Self appointed leader) [All as the Micronauts]; Lady Cilicia (cameo)
Synopsis
After a brief scuffle with Acroyear over leadership of the Micronauts, Scion helps the Micronauts breach the spacewall and get back to the microverse.

Scion self-appoints himself leader of the Micronauts in this story.

Find Your Way to the Newtons Treasure Chest!! (Table of Contents: 3) (Expand) /

Bonkers! Fruit Candy Hits You with a New Flavor. (Table of Contents: 11) (Expand) /

Reach for the Stars (Table of Contents: 14)