This issue is a variant of Shazam: The New Beginning (DC, 1987 series) #1 [Direct]. There exist further variants. 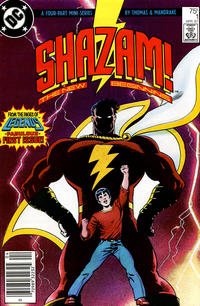 Shazam! The New Beginning [Part One] (Table of Contents: 2)

Job Number
G-2787
Genre
superhero
Characters
Billy Batson [Captain Marvel]; Dudley Batson [Uncle Dudley]; Dr. Thaddeus Bodog Sivana; Beautia Sivana; Magnificus Sivana; Jocko; Wizard Shazam; Black Adam; Mary Marvel (in Shazam's vision); Captain Marvel, Jr. (in Shazam's vision)
Synopsis
After the death of his parents, Billy is forced to choose between living with his Uncle Dudley and his other uncle, Dr. Thaddeus Sivana. Not wanting to be a burden to Dudley, Billy chooses to live with Sivana. Upon learning of Sivana's darker side, Billy runs away, and a stranger leads him to a mysterious subway station where the Wizard Shazam gives Billy the power to become Captain Marvel.
Reprints

New post-crisis origin of Billy Batson and Captain Marvel. Shazam is shown to remember previously giving powers to Billy, Mary, and Freddy but he knows that now that did not happen (due to the events of Crisis on Infinite Earths).