The Chariot in the Sky! (Table of Contents)

Credits for pencils and inks confirmed from Julius Schwartz's editorial records, provided by DC Comics. Index originally had Joe Giella as inker with Murphy Anderson only on Adam Strange's face. 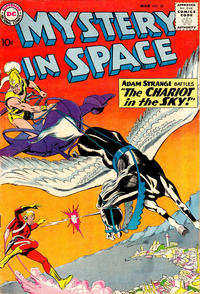 Chariot in the Sky (Table of Contents: 2)

Genre
adventure; science fiction
Characters
Adam Strange; Alanna; Apollo; Hercules; Jupiter
Synopsis
Adam is transported to Rann where he's nearly zapped by the thunderbolts of Jupiter. Fleeing, he and Alanna are attacked by Apollo in his flying chariot. They evade Apollo, and Alanna tells Adam how Jupiter, Apollo, and Hercules recently arrived on Rann, thinking it was their planet Olympia, conquered while they were away. Adam challenges the trio to individual duels. Defeated by Adam, and with calmer heads, the trio realize that their navigation system was fouled up just as their ship heads back into space without them. Adam helps the trio catch up to their ship before he returns home.
Reprints

The Dancing Trees of Polaris-Seven! (Table of Contents: 6)

Genre
science fiction
Characters
Teo "Ditmos" Walker (espionage agent); the Leader; General Ku-um; Fraster of the Mohr-Ban
Synopsis
Since the Mohr-Ban offensives against Earth have been ineffectual, they eventually decide that Earth must be acting with inside information. Connecting Earth attacks on three of their planets with the visits of an entertainment troupe, agents of the Mohr-Ban know where to start looking. Teo Walker, an earthman, has disguised himself as "Ditmos," an entertainer who can make plants "dance" by playing a small flute. When the Mohr-Ban show up at his next performance, he knows the jig is up. With the help of his dancing plants he's able to make his getaway and get his final report to Earth.
Reprints

Original pencil credits of Mike Sekowsky replaced by Gil Kane based on discussion with Arthur Lortie and Phil Rushton.

First Line of Dialogue or Text
A dark band -- the obscuring effect of the huge dust clouds -- in front of Galaxy NGC 4594...
Genre
non-fiction; math & science

The Amazing Journeys into Space! (Table of Contents: 9)

Genre
science fiction
Characters
Ted Larkin; Colonel Edwin Blake; Stanley Adams; Frederick Tomkins
Synopsis
Ted Larkin had three goals growing up: he wanted to be first to land on Mars, the first to fly through the sun, and the first to circumnavigate the universe. But hard work only let him watch Edwin Blake, Stanley Adams, and Frederick Tomkins attain his goals. Disillusioned, Ted is mulling his future when he finds a piece of metal with time travel properties and decides to go back in time and beat the other three men to their goals. His better nature prevails, however, and on his time travel jaunts he instead helps the three other men accomplish their feats.
Reprints