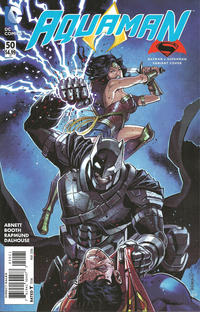 This is the first full appearance of Dead Water, in the previous issue we only saw his clawed hands. In issue #51, we learn that his real name is Jonah Payne.

Mera refers to herself as Aquawoman, and wears a costume similar to Aquaman.