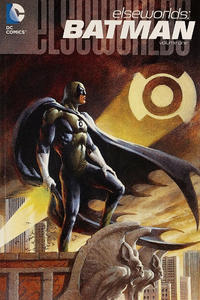 Dr. McNider tells Bruce of working with Alan Scott, Carter and Shiera, and Rex Tyler. In the mainstream universe these people would be the Golden Age Dr. Mid-Nite, Green Lantern, Hawkman, Hawkgirl, and Hourman. In the mainstream DC Universe, Judson Caspian was the vigilante called the Reaper whom Batman encountered in the second year of his career. The Lori with whom Arthur Curry was mated was presumably Lori Lemaris. The witch is unnamed, but speaks her spells in backwards-speak and wears a costume reminiscent of the Zatanna from the mainstream DC Universe. The Green Man is an alien, found by a Kansas couple and turned over to the state, who possesses powers and abilities beyond those of mortal men; i.e., in the mainstream DC Universe, Superman.

The Blue, the Grey, and the Bat (Table of Contents: 2)

The Devil's Workshop (Table of Contents: 5)

The Castle of the Bat (Table of Contents: 6)

In Darkest Knight (Table of Contents: 7)

Elseworlds: what if Batman had a Green Lantern ring?

Genre
fantasy-supernatural; superhero
Characters
Batman; Majister (death); Lilandra (death); Saressa (death); Jaymes; Rath (death); Shad; Dark Joker (villain, death); Demons (villains)
Synopsis
On the Elseworld world of The Wild, the Batman is born as a winged creature of the night to save the world from his sadistic brother, the Dark Joker.
Reprints