No letters column this issue.
This issue is a variant of Batman (DC, 1940 series) #306. There exist further variants:

Back from the Grave-- The Batman's Most Murderous Foe: The Black Spider! (Table of Contents) 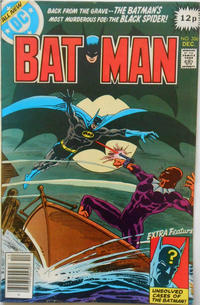 Night of Siege (Table of Contents: 1)

According to Julius Schwartz's editorial records (supplied by DC Comics), this story was originally 17 pages and was cut to 15 before publication.

The Mystery Murderer of '"Mrs. Batman"! (Table of Contents: 2)