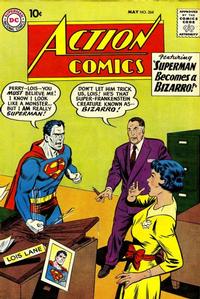 What's Wrong with These Pictures? (Table of Contents: 1)

Inside front cover; published in cooperation with the National Social Welfare Assembly. Later appeared in DC comics cover-dated May 1965.

The Superman Bizarro! (Table of Contents: 2)

Genre
superhero
Characters
Superman [Clark Kent]; Perry White; Lois Lane: Jimmy Olsen; Bizarro; Bizarro-Lois; Clark Kent robot
Synopsis
Captured by the Bizarros on Bizarro World, Superman is sentenced to be turned into a Bizarro himself. He dreams what it would be like if the sentence was carried out.
Reprints
Keywords
Bizarro World; dream; Fortress of Solitude

Supergirl Gets Adopted! (Table of Contents: 7)

Genre
superhero
Characters
Supergirl [Linda Lee]; Mr. Wilkins; Mrs. Wilkins; Miss Hart
Synopsis
Linda has to scheme to prevent herself from being adopted to protect her secret identity. She spends 30 days with the Wilkins. Mr. Wilkins is a policeman.
Reprints

First Line of Dialogue or Text
My, my, look at all those books...
Genre
humor
Characters
Professor Eureka
Reprints