Distributed to newsstands in December 1959. This issue includes 10 pages of paid advertisements (pages 2, 9, 15, 19, 25, 27, 33-36 of comic including inside front cover, inside back cover and back cover); pages of comic not numbered. All new stories in this issue are narrated in the first person unless otherwise specified.
On sale date as given in the copyright application as listed in the Catalog of Copyright Entries, Periodicals, January-June 1960, page 148, registration number B818202. 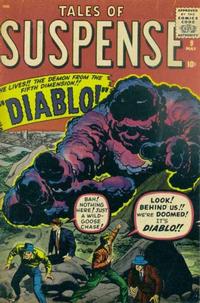 I Saw Diablo! The Demon from the Fifth Dimension! (Table of Contents: 1)

Job Number
T-631
First Line of Dialogue or Text
It was a legend come to life...
Genre
horror-suspense
Characters
Diablo; Ulysses Bloodstone (unnamed, identified in later retcon)
Synopsis
An extradimensional smoke monster invades the Earth. It could have destroyed humanity, but an adventurer tricks it by blowing out the smoke from a lighter, making it think humans can destroy it.
Reprints

The Mirror (Table of Contents: 2)

Job Number
H-762
First Line of Dialogue or Text
"I must be going mad," Bruce Morton muttered to himself as he...
Genre
fantasy-supernatural
Characters
Bruce Morton; Miss Coleman
Synopsis
A wealthy but unhappy man is motivated to change his life by the vision of his past that he sees in his mirror.
Reprints

The first page of this story is printed between the lead story and "The Wrath of Chondu!", while the second page is printed between "Earth Will Be Destroyed!" and "The Return of the Living Robot!". The last page is split with the statement of ownership. Text story is pages 8, 26 of comic (pages of story not numbered).

The Wrath of Chondu! (Table of Contents: 3)

Job Number
T-624
First Line of Dialogue or Text
Once a year I come to the United States and give lectures on yoga!
Genre
fantasy-supernatural
Characters
Chondu [Harvey Schlerman] (introduction); Joe Parker; Albert; Ethel; Charlie
Synopsis
A mystic is accosted by an escaped convict on the road, but mentally sends him to Limbo.
Reprints

Time on My Hands! (Table of Contents: 4)

Job Number
T-626
First Line of Dialogue or Text
The time was a summer's night in the year 1965...
Genre
science fiction
Synopsis
A man steals a time machine to learn how to get rich but is stranded when he accidently leaves it in a garbage incinerator.
Reprints

Earth Will Be Destroyed! (Table of Contents: 5)

Job Number
T-641
First Line of Dialogue or Text
Behold the planet of Gorgon!!
Genre
science fiction
Synopsis
Aliens plot to devastate Earth before invading, but they cannot pinpoint its location. They are unaware that they are on Earth as a speck of dust in a petri dish, which is casually discarded.
Reprints

Narrated in the third person. This story is retold with a single creature in Tales to Astonish (Marvel, 1959 series) #18 (April 1961) as "Monsteroso!" drawn by Steve Ditko and in Amazing Adult Fantasy (Marvel, 1961 series) #9 (February 1962 series) as "The Terror of Tim Boo Baa" by Stan Lee and Steve Ditko. Stan Lee is speculatively credited as the writer on the basis of his authorship of the second re-telling.
Story is pages 20-24 of comic (pages of story numbered 1 to 5).

Average sales not printed. This shares the last page of "The Mirror".

The Return of the Living Robot! (Table of Contents: 7)

Narrated in the third person. Continues from last issue. Story is pages 28-32 of comic (pages of story numbered 1 to 5).