On-sale date from ad in Challengers of the Unknown #14 and copyright registration.

The Case of the Stolen Super-Powers! (Table of Contents)

Compare this cover with the cover on Strange Adventures (1950 series) # 14. 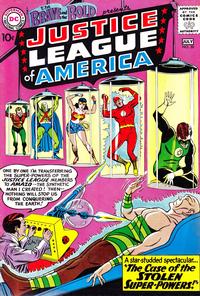 Case of the Stolen Super-Powers! (Table of Contents: 2)

Genre
superhero
Characters
Justice League of America [JLA: Green Lantern [Hal Jordan]; Martian Manhunter [J'onn J'onzz]; Flash [Barry Allen]; Wonder Woman [Diana Prince]; Aquaman [Arthur Curry]; Superman [Clark Kent]; Batman [Bruce Wayne]; Snapper Carr]; Amazo (introduction, origin, villain); Professor Ivo (introduction, villain); Mirror Master (cameo)
Synopsis
As several JLAers experience a sudden power loss, Flash finds that someone has used powers like theirs to steal a European catfish and a cicada. Snapper suggests the thefts have to do with someone researching immortality, and the JLA splits up to investigate other long-lived creatures. In every case, the JLAers come up against Amazo, who steals their powers, defeats them, and takes them to his creator's lab, where Professor Ivo is preparing an immortality serum. Green Lantern is able to use the weakness of his own ring against Amazo and Ivo, restore the JLA's powers, and defeat the villain.
Reprints

On the page between page 16 and page 17 of the main story sequence. Header image taken from the JLA story in The Brave and the Bold #28.

First Line of Dialogue or Text
All bees sting...

Be Your Own Boss! (Table of Contents: 8)