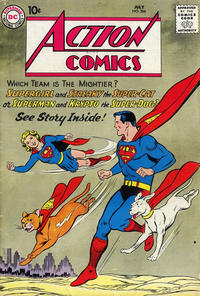 Feature Logo
Buzzy
Genre
advocacy; teen
Characters
Buzzy Brown
Synopsis
Tom is tearing down the campaign posters of the candidate his father opposes, until Buzzy shows him that his father is much more fair-minded.

The Captive of the Amazons (Table of Contents: 2)

Feature Logo
Superman [rounded u bottom]
Genre
superhero
Characters
Superman [Clark Kent]; Princess Jena; Lois Lane; Perry White; Rog
Synopsis
Princess Jena from the planet Adoria comes to Earth and tricks Superman into returning to Adoria with her, where she forces him to marry her.
Reprints

The Adorian society is made of Amazon-like women and meek and mild men.