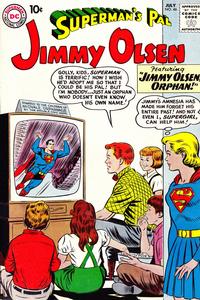 Genre
advocacy; teen
Characters
Buzzy Brown; Tom
Synopsis
Tom is tearing down the campaign posters of the candidate his father opposes, until Buzzy shows him that his father is much more fair-minded.
Keywords
elections

First Line of Dialogue or Text
Well, that's the last of my newspaper delivery!
Genre
humor

First Line of Dialogue or Text
How do you like these new shorts...
Genre
humor
Reprints