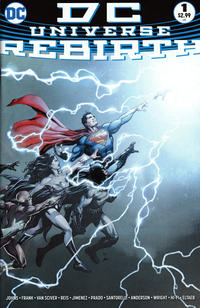 All black page inside front cover

Batman is seen in the Batcave pondering what the Mobius Chair meant when it told him that there were 3 Jokers, as shown in Justice League (DC, 2011 series) #50.

In an attempt to get through to Batman, Wally tells Bruce to remember how he got the letter from his father Thomas. This letter had been brought back from the Flashpoint universe by Barry Allen and given to Bruce, as shown in the Flashpoint 2011 mini-series.

Johnny Thunder is next shown in The Flash (DC, 2016 series) #21 searching for the Justice Society.

Saturn Girl is next shown as a patient in Arkham Asylum who can foresee the future in Batman (DC, 2016 series) #21.

Grail with her father Darkseid re-incarnated as an infant, seeks Wonder Woman's twin brother, whose existence was revealed in Justice League (DC, 2011 series) #50.

Superman, Lois, and their son Jonathan from the pre-Flashpoint Universe were shown to be secretly living on Earth in the New 52 universe in Superman: Lois & Clark (DC, 2015 series).

All black page appearing before the epilogue

Genre
superhero
Synopsis
On Mars, a broken watch is pulled apart and repaired, apparently a parallel as to what happened to the DC Universe when the Flashpoint Universe transitioned to the New 52 Universe. 2 unseen characters discuss whether they did the right thing.
Reprints

The imagery of the watch cogs, the clock-face with Roman numerals, the planet Mars, one of the voices belong to a character named Adrian, and the other voice using blue caption boxes suggests that the 2 characters are Ozymandias [Adrian Veidt] and Doctor Manhattan of the Watchmen series. This storyline is addressed in Doomsday Clock (DC, 2018 series).

[The Clock is Ticking Across the DC Universe!] (Table of Contents: 8)

Credits listed by chapter, illustration of a blood-spattered clock with the time of a quarter to twelve.

2 page illustration of many of the DC Universe Rebirth characters. This image was also used for a DC Universe: Rebirth poster.

Inside back cover checklist of issues and on sale dates for the Rebirth one-shots for the various DC titles.