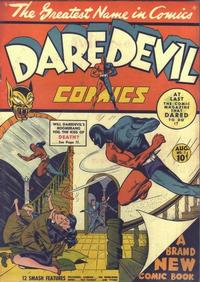 Lists all 10 features inside the book with super brief synopses.

Also lists the Editors as Charles Biro and Bob Wood.

The splash page features the "Seal of the Princess Sheba".

[Introducing the Whirlwind] (Table of Contents: 3)

First Line of Dialogue or Text
Some men would come out of the experience described here with guns blazing.
Genre
superhero
Characters
Nightro [Hugh Goddard] (introduction, scientist, origin); Dr. Miller (introduction); Hoag (villain, introduction); Tollini (villain, introduction)
Synopsis
Two unscrupulous miners, having discovered a vein of pitchblend (or radium), have their find confirmed by scientist, Hugh Goddard. But when Hugh suggests turning the discovery over to the Cancer Cure Foundation, the greedy miners club Hugh and depart with their discovery, leaving Goddard abandoned in the Alaska wilderness with little hope of survival.
Reprints

Nightro, who becomes snow blind, can see again with the use of polaroid lenses in his glasses, something strangely familar when one looks at how DC's Dr. Mid-Nite could see with infra-red lenses.

Genre
adventure
Characters
Dash Dillon (introduction, medical student); Coach Taylor; Lynn Taylor (the baseball coach's daughter); Tony (Dash's friend);
Synopsis
The baseball team at Hale University is doing poorly and Coach Taylor is in danger of losing his job. However, his daughter suggests to Dash Dillon that he join the team since he is such a great pitcher and hitter.......and his talents may be enough to turn things around and save her Dad's job.
Reprints
Keywords
Hale University

[The Coming of the Pioneer] (Table of Contents: 6)

Genre
adventure
Characters
The Pioneer (introduction, origin); The Boss (villain); Joe (villain); Scotty (villain)
Synopsis
The Pioneer hears a crash and discovers a wrecked car with injured men at the bottom of a gorge. He nurses them back to health, not realizing that they are escaped killers!
Reprints

Only appearance, even though the last panel says that the Pioneer will return in the next issue.

When the artist signed his name, below it it reads "Copr. 1941 The Freelance".

Daredevil on "Defense" (Table of Contents: 7)

The last part of page two has a feature mastheaded "Daredevil's Punch-of-the-Month", with title "The Left-Hook", plus an illustration of Daredevil. Daredevil explains when the punch is usually used and how it is delivered.

[Origin of the Bronze Terror] (Table of Contents: 8)

London Can Take It! (Table of Contents: 9)

Genre
superhero
Characters
London [Marc Holmes] (introduction); Dian (introduction); Prime Minister Winston Churchill; Admiral Hawkins; Dian (Prime Minister's niece); Franz (villain); the Nazis (villains)
Synopsis
A prisoner in a concentration camp, Franz escapes with the help of Dian and makes his way to London, where he is greeted and lauded by the Prime Minister himself. However, Holmes smells a rat, and that rat turns out to be Franz himself, who kidnaps Churchill and is in the process of taking him to see Hitler himself when he is stopped by Holmes.
Reprints
Keywords
H.M.S. Balfur; the BBS

Genre
superhero
Characters
Pat Patriot [Patricia Patrios] (introduction, origin); Mike Brown (introduction, Pat's boy friend); un-named foreman (villain, introduction)
Synopsis
Pat is fired from her job at the Mallison Airplane Plant by a less than friendly foreman and appears in a play later that evening, garbed in a rather patriotic costume. Later, when she discovers that her former foreman is smuggling airplane engines to the enemy, she steps forward to stop his activities.
Reprints
Keywords
Mallison Airplane Plant

The Archives reprint lists Reed Crandall as artist. However, the art style here resembles the work of Frank Borth on the Phantom Lady.

The last panel gives the title of next issue's story: "The Battle of the Centuries!".