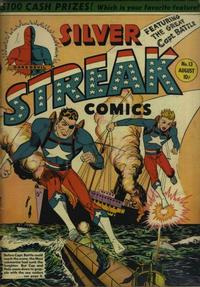 Genre
superhero
Characters
Captain Battle [Jonathan Battle]; Hale Battle; Dr. Goode; Dr. Goode's daughter; Priesthood of Moko (villains); Hans (villain); un-named Nazi sub commander (villain, death); the Nazis (villains)
Synopsis
Captain Battle rescues Hale from the Priesthood of Moko, who are in the process of sacrificing him to their god, then heads with his young charge to deal with a Nazi sub attacking a small town. They rescue the daughter of the Dr. Goode, who has been taken prisoner by the Germans because of his secret wound-healing formula. After she makes a costume for the young boy, patterned after the Captain's, they head out to save the good doctor.
Reprints
Keywords
Dissolvo-Gun; Luceflyer

The last 1/3 of the last page of the story is a plug for the latest Silver Streak and Captain Battle Comics issues, plus a photo of Captain Battle making a public appearance in New York City and promotion for readers to join Captain Battle's Boys' Brigade.

The Adventure of the Laughing Hyena (Table of Contents: 3)

Genre
superhero
Characters
The Silver Streak [un-named taxi cab driver]; Meteor [Mickey O'Toole]; The Hyena ["Bull" Karson] (villain, introduction); the Hyena's gang [Joe; un-named others](villains)
Synopsis
The Streak and Meteror read with the disgust about the lynchings of negro sharecroppers by the bloodthirsty Hyenas, and decide to do something about it.
Reprints
Keywords
Souda (a village)

Mercury is renamed Meteor in this story. The last panel gives the title for the next story "Case of the Totem Pole".

[The Bomb Saboteurs] (Table of Contents: 4)

Genre
adventure; aviation
Characters
Cloud Curtis; "Crusher" McCoy; "Pop" Whistler; Slouchy (villain); two un-named gang members (villains, both die)
Synopsis
Cloud catches a couple of thugs trying to blow up his aircraft hanger, and discover that others in their group plan to blow up International Aeroplane and a U.S. battleship. So, he sets out in the Golden Bullet to stop those schemes.
Reprints
Keywords
Golden Bullet

Quick Revenge, or, You Can't Do That To My Buddy (Table of Contents: 5)

[The Treasure Map] (Table of Contents: 6)

Genre
adventure
Characters
The Pirate Prince;
Synopsis
The Prince fishes a bottle out of the ocean, which contains an incomplete treasure map inside. Accidently knocked overboard, he then dreams of seeing the treasure, landing on an island and meeting someone who tells him that he will get clues to the missing pieces of the map from weird beings on the island.
Reprints

[The Mad Elephant] (Table of Contents: 8)

Letterer credit added by Craig Delich 2013-2-21. The last panel tells of Lance Hale's next battle, this time against a man-eating crocodile.

First Line of Dialogue or Text
He's done it again!
Genre
adventure
Characters
Dickie Dean; Zip Todd; Professor Blankhorne (villain, introduction, death); C.B. Wolf (villain, death)
Synopsis
Dickie invents a photo lightning machine that can generate a bolt of lightning that can hit any spot within a radius of miles. He takes it in to the offices of Kent Burk and Endicott to get it patented, not realizing an imposter is on hand to steal the invention and get it to Professor Blankhorne.
Reprints
Keywords
Photo-lightning Machine; Sky Bug

Genre
superhero
Characters
Thun-Dohr (introduction, origin); un-named parents of Thun-Dohr (both die); The Dalai Lama; Dr. Benson Bell (death); Sin Khaii (villain, introduction); Clavell (Professor Bell's assistant, made evil by the Black Madness)
Synopsis
At a monastary in ancient Tibet, a young American Lama, now called Thun-Dohr, is summoned by the Dalai Lama and told the story of a white search party that met its fate looking for Lha-I-Ha......there was one survivor, a young baby, brought to the Dalai Lama. This young man is told he was then trained, in mind and body, in the arts of the Gom-pa, and that, now, he must undergo the tests of the Potala. He passes and is given a bracelet of gold that connects the spirits of himself and the Dalai Lama, who will fight evil together....in spirit.
Reprints
Keywords
Monastary of Lha-I-Ha; Pandora's Box; the Black Madness

Jeff Remon is a by-line for the strip only.

The Riddle of the Missing Bullet! (Table of Contents: 11)

Genre
adventure
Characters
Presto Martin [also as Mr. Billups]; Sergeant Murphy; Toni Billups; Mr. Billups (death); Battleship LeBlanc (boxer); Jackson (villain); un-named cook (villain)
Synopsis
Presto runs into ex-movie star and acquaintance, Toni Billups, and finds out that her father has been having dreams in which he is going to be murdered. Later, he is informed at a boxing match that Toni's father has indeed been killed and Prestpo is off to discover the killer's identity.
Reprints

There is a blurb at the bottom of the last page giving the title of next issue's adventure, "The Case of the Baseball Murders".

The Affair of the Scarlet Skull (Table of Contents: 12)

Policeman at the Police Station is shown reading a copy of Silver Streak Comics. The last panel reveals the next story title: "Enter the Parson".