Barcode on back cover.
This issue is a variant of Daredevil The Man without Fear (Marvel, 1993 series) #2 [Direct Edition]. 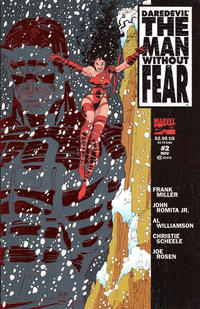 Brief recap and explanation of the series.

The Man without Fear Chapter 2 (Table of Contents: 2)

Genre
superhero
Characters
Matt Murdock [Daredevil]; Foggy Nelson; Elektra; Battling Jack Murdock (dead); Stick; Stone; Fixer (villain, death); McHale (villain); Gillian (villain); Slade (villain); Marcello (villain); Angelo (villain)
Synopsis
Matt goes after his father's killers. The Fixer has a heart attack as he is pursued. When confronting the last of the Fixer's men, Matt accidentally kicks a prostitute out of a window and she dies. Stick gives up on Matt because of his quest for vengeance. Matt starts college and begins rooming with Foggy. On a late night jaunt through the city, Matt meets Elektra and gives her chase.
Reprints