Distributed to newsstands in April 1960. This issue includes 10 pages of paid advertisements (pages 2, 9, 15, 19, 25, 27, 33-36 of comic including inside front cover, inside back cover and back cover); pages of comic not numbered. All new stories in this issue are narrated in the first person.
On sale date as given in the copyright application as listed in the Catalog of Copyright Entries, Periodicals, January-June 1960, page 148, registration number B893673.

I Created Sporr, the Thing That Could Not Die! (Table of Contents) 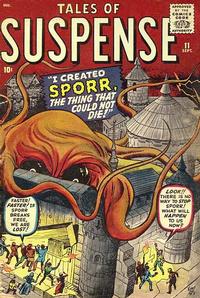 I Created...Sporr! The Thing That Could Not Die! (Table of Contents: 1)

Job Number
T-778
First Line of Dialogue or Text
Even on that first fateful night when I arrived in...
Genre
horror-suspense
Characters
Sporr (giant amoeba); Bruno
Synopsis
A scientist moves into Dr. Frankenstein's castle to set up his experimental growth ray. When he trains it upon an amoeba, the frightened villagers burst in, and seeing the equipment, think he is going to bring ruin down upon them and hustle him off to the town jail. With no one to shut off the growth machine, the amoeba grows to huge size and smashes out of the castle to menace the village. The scientist escapes his jail cell and uses his labcoat soaked with sugar to lure Sporr into a quicksand pit.
Reprints
Keywords
Transylvania

The Thread (Table of Contents: 2)

Job Number
A-786
First Line of Dialogue or Text
Red's Water Front Shack was the same tonight as any other, only for...
Genre
horror-suspense
Characters
Matt Anderson; Midget Morgan/Count Morgan; Dr. Waynne; Pete; Mick; Red Murdock
Synopsis
The mysterious death of a scientist reveals a mystical device and leads to the death of a centuries-old Italian count.
Reprints
Keywords
Yukon River

Text story with illustration. The events of this story are dated January 8, 1952. Text story is pages 8, 26 of comic (pages of story not numbered).

I Know the Secret of the Flying Saucer! (Table of Contents: 3)

Job Number
T-744
First Line of Dialogue or Text
I was there on Mars when the flying saucers were rocketed to Earth!
Genre
science fiction
Synopsis
150 Martian flying saucers land on Earth, but do nothing after landing. Since no pilots emerge the natives transport the craft to military bases where their hulls are experimented upon, but cannot be penetrated. At a prearranged signal, all the saucers open a port. The curious scientists and military men enter, but discover no pilot or instrumentation. After they leave, the saucers return to Mars secure in the knowledge that was absorbed from their minds that Earth is no threat to them. The saucers themselves are the Martians.
Reprints
Keywords
Earth; Mars; Nassau county; Plan X

Beware the Eyes of Igor! (Table of Contents: 4)

Job Number
T-758
First Line of Dialogue or Text
Look into my eyes...
Genre
science fiction
Characters
Igor
Synopsis
A hypnotist uses his power to rob a movie theatre, but accidentally hypnotizes himself and forgets the whole plan.
Reprints

I Escaped to Another World! (Table of Contents: 5)

Job Number
T-779
First Line of Dialogue or Text
The year was 1962...
Genre
science fiction
Characters
Dr. Kermanki
Synopsis
A prisoner escapes and uses a time machine to travel into the past, but he accidentally kills his own ancestor, erasing himself.
Reprints
Keywords
London; time travel