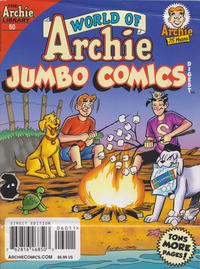 A Knight to Remember (Table of Contents: 2)

Genre
humor
Characters
Mr. Weatherbee; Archie Andrews
Synopsis
Mr. Weatherbee is having bad luck fishing on the dock so Archie invites him to come in his boat. When the motor cuts out Mr. Weatherbee demonstrates his survival skills.
Reprints
Keywords
fishing

The Commercial (Table of Contents: 4)

The Caretaker (Table of Contents: 5)

The Blackest (And Bluest) Day (Table of Contents: 10)

Many of the cameos appear on page 9 when Archie stumbles into the hidden base of P.O.P. On that page is a obscured picture of a male with an eye patch over his left eye, tenatively identified as Nick Fury. Page 12 shows a store named "Norman's Taxidermy", a reference to Alfred Hitchcock's movie "Psycho". Mad Doctor Doom and Chester first appeared in Adventures of Little Archie (Archie, 1957 series) #24.

The Mystery of Skull Island (Table of Contents: 18)

The Body Beautiful (Table of Contents: 21)

A Weighty Matter (Table of Contents: 23)

Genre
teen
Characters
Archie Andrews; Betty Cooper; Veronica Lodge; Chuck Clayton; Jughead Jones
Synopsis
Betty and Veronica are planning a surprise party for Archie and try to convince him they will be out of town.
Reprints

Genre
humor
Characters
Mary Andrews; Fred Andrews; Archie Andrews
Synopsis
Fred decides that he and Archie can paint the house themselves and save some money.
Reprints

No Competition (Table of Contents: 27)

Unscramble the letters to find out what drove Archie out of the water.

The Dark Avenger! (Table of Contents: 30)

Genre
teen
Characters
Archie Andrews; Veronica Lodge; Reggie Mantle; Hiram Lodge
Synopsis
Veronica learns that Archie has his own college savings account that he's been putting money into for years, and that it now totals almost two thousand dollars. When she asks him to use some of that money to take her out, he refuses, saying he will sacrifice anything - even her - rather than touch his college account.
Reprints

Genre
humor; teen
Characters
Archie Andrews; Betty Cooper; Jughead Jones; Adam Chisholm; Reggie Mantle; Veronica Lodge; Hot Dog
Synopsis
Archie promised both Betty that he'd be at her championship baseball game and Veronica that he'd help with a charity car wash. He ends up rushing back and forth between each of them.
Reprints

The Comeback (Table of Contents: 36)

The Sound and the Fury (Table of Contents: 37)

The Human Handbook (Table of Contents: 39)

Genre
humor; teen
Characters
Archie Andrews; Waldo Weatherbee
Synopsis
Archie suggests some ways for Mr. Weatherbee to cool off at the beach, but he rejects them all as too dangerous.
Reprints
Keywords
surfing; wind surfing

Pipes of Panic (Table of Contents: 49)

Model for Mayhem (Table of Contents: 50)

Genre
drama; fantasy-supernatural
Characters
Archie Andrews; Waldo Weatherbee; Jill Johnson; Malcolm Meeks
Synopsis
Archie takes up jogging through Pickins' Park, and meets a beautiful but unsmiling girl who warns him to be careful at the dangerous "Coffin Curve" at the bottom of Thrill Hill. Mr. Meeks tells Archie that this was Jill Johnson, a girl who was killed at Coffin Curve a decade earlier when a drunk driver couldn't make the curve and ran into her. Archie can't believe that he talked to a ghost, but when he's running past Coffin Curve that night, Jill reappears to save him from sharing her fate.
Reprints
Keywords
ghost; jogging

Malcolm Meeks, as stated in a footnote in the story, first appeared in Archie and Me #141 as a Riverdale High teacher, and transferred to another school by the end of that story.

The paper Archie reads near the end of the story has the headline "Prune Fungus Rages in East." The "prune fungus" is a running gag in Bolling's stories, with many newspaper headlines and announcements mentioning an outbreak of this nonexistent disease.

[Subscribe to all your favorite comics double digests...] (Table of Contents: 61) (Expand) /