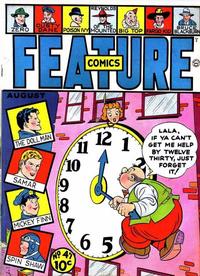 School of Crime (Table of Contents: 1)

According to Lee Boyette in Alter Ego #90, Fran Matera sneaks his initials into panels on pages 5 and 7. According to Jim Amash, in the Quality Companion, and who had done an interview with Matera, he states this art is by Reed Crandall.

[The Car-Wrecking Ghost] (Table of Contents: 3)

Genre
detective-mystery
Characters
Zero; Joe Rucks (villain, a ghost, introduction, death)
Synopsis
Zero uses a rather unique way of defeating the giant ghost of Joe Ricks: merely talking to him. By repeating the word "evil" ("live" spelled backwards, the one thing a ghost cannot do), Zero reduces the ghost in size, and, from there, Rucks continues to shrink with every word uttered.

[Diamonds and Dastards] (Table of Contents: 4)

Signed MDE in last panel as mentioned in Alter Ego #75.

First Line of Dialogue or Text
Look over in that lot, Mickey. It's a free-for-all!
Genre
humor

First Line of Dialogue or Text
Don't you want to stay and play with your friends?
Genre
humor

Ribbons of Death (Table of Contents: 9)

Genre
superhero
Characters
USA; Mrs. Cragg (villain, introduction); un-named spies (villains, introduction for all)
Synopsis
USA, dressed in her full garb, goes to work alongside civilian women in a bomb factory, and manages to uncover a spy working there: her own supervisor, Mrs. Cragg!

The Death That Crawled (Table of Contents: 12)

First Line of Dialogue or Text
The boss said I was to bring this important letter to him at his snooty club!
Genre
humor

[The Nazis Come to South Pango] (Table of Contents: 15)