Some information was verified using a DCM scan (http://digitalcomicmuseum.com/).

The Archives volume also lists Gill Fox assisting on the art chores on this cover. 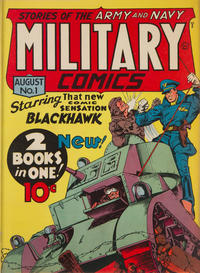 [The Origin of Blackhawk] (Table of Contents: 1)

(1) Writer addition of Bob Powell and letterer credit per Chuck Cuidera.
(2) Introduction of Blackhawk. Introduction and death of Blackhawk’s brother Jack and sister Connie (both buried by Blackhawk). Blackhawk (DC, 1957 series) #242 (Aug-Sep 1968) reveals that Blackhawk's civilian name is Bart Hawk, however, the story of Jack's death in that issue is vastly different from the original account, and therefore cannot be considered in the same continuity. Given this, one cannot state unequivocally that the three siblings' last name is "Hawk", or that Blackhawk's first name is "Bart".
(3) A minimum of 8 Blackhawks, including Blackhawk himself, are depicted. Baker, a Cockney Englishman, is the only one named. Based on later revelations of the team's early membership, the 6 unidentified members likely include Andre, Hendrickson, Olaf, Stanislaus, Zeg, Chuck, and/or Boris. Based on his physical appearance, the prisoner referred to as "Blackhawk's man", seen on page 5 panel 4 between the Red Cross nurse and Captain Von Tepp, could be Andre or Zeg. Based on his physical appearance, the man struck in the head by a rock, seen on page 6 panel 9, could be Stanislaus, Olaf, or Boris.
(4) A small map of Blackhawk's Island is depicted.
(5) The lyrics to the song of the Blackhawks are: "Over land over sea, we fight to make men free, of danger we don't care... we're Blackhawks!"

[Flying with the Red Dragon] (Table of Contents: 2)

[Origin of the Blue Tracer] (Table of Contents: 3)

Genre
aviation; war; adventure
Characters
Captain William "Wild Bill" Dunn (introduction); Private Boomerang Jones (introduction); the M'Bujies (villains, introduction for all, some die)
Synopsis
"Wild Bill" Dunn, an American engineer, survives a British scouting expedition in Ethiopia, meets an Australian named Private Jones, and for months they work together to create a war machine from the remains of Fascist equipment that they call the Blue Tracer, and which they hope will provide the capabilities to overcome a local enemy tribe.
Reprints

[Episode with a Goat] (Table of Contents: 4)

The Millennium Edition lists Frank Frollo as the artist.

[The Coming of the Yankee Eagle] (Table of Contents: 6)

[Origin of the Death Patrol] (Table of Contents: 7)

Genre
humor
Synopsis
Sarge orders his men to dismantle, then reassemble their machines guns inside of ten minutes.
Reprints

First Line of Dialogue or Text
Out of the very heart of the spirit that is America comes a new champion of democracy...
Genre
superhero
Characters
Miss America [Joan Dale] (origin) (introduction, reporter); unnamed FBI Chief Inspector; Mr. Grost (villain, factory owner)
Synopsis
Joan is imbued by the famed Statue of Liberty with special powers in order to help the country against her enemies, foreign and domestic, gaining her name from a man she saved from an attack by thugs. She uses her new powers to deflect a bomb and crush the getaway car of the spies involved.
Reprints
Keywords
Statue of Liberty

Gone with the Draft (Table of Contents: 11)

Genre
non-fiction; war
Characters
Dirk
Synopsis
After discussion of the draft, a letter from a trainee at Fort Wadsworth Training Center in New York discusses what went on during his first week in basic training.
Reprints

The text story has three spot illustrations, as well as an illustrated drawing with text about the Garand rifle.

Only appearance of this feature.