[Introducing the Firebrand] (Table of Contents) 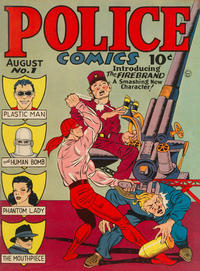 [Introducing the Firebrand] (Table of Contents: 1)

Slugger was originally named Slugger Shea. Firebrand, in the early stories, left his signature torch emblem for the police to find.

Genre
adventure; crime; detective-mystery; superhero
Characters
#711 [Daniel Dyce] (introduction, origin); un-named district attorney; Mary Horn (Jacob's wife, not seen); Jacob Horn (villain, death); "Slick" Panzer (villain)
Synopsis
Dan agrees to take the rap for a soon-to-be-father, who agrees to give himself up to the law after seeing his newborn and wife. But when he is killed in an accident, prisoner #711 decides to remain behind bars and fight crime from there, in this case against Slick Panzer, who has swindled a widow out of $250,000.
Reprints
Keywords
A mirror with cell bars painted across it (711's symbol)

#711 wears a crimson jacket and cape and a hat which cast a heavy shadow over his face.

[The Attack of Ali Harid] (Table of Contents: 4)

Script credit from Millennium Edition: Police Comics No. 1 (DC, 2000 series) #nn. The Who's Who lists no writing credits for Williams, so ? placed beside the script credit. Script/artist correction by Craig Delich 2012-7-3

"Clark Williams" is a house name.

[The Legend of the Black Baron] (Table of Contents: 5)

Genre
detective-mystery; superhero
Characters
Chic Carter [The Sword] (reporter); Curtis Randall (art collector, death); Detective Monahan; Hodges (Curtis Randall's butler, death); Betty Randall; Damon (cousin); The Black Baron [Harvey Randall] (villain, death)
Synopsis
When Curtis Randall decides to change his will and give away his entire art collection, he is seemingly murdered by a suit of armor belonging to one of his ancestors. Chic is present for the reading of Randall's will and uncovers a murder plot by the deceased's brother Harvey, The Black Baron, wearing a skull mask, tries to claim his brother's fortune but falls to his death in the end.
Reprints

Millennium Edition: Police Comics No. 1 (DC, 2000 series) credits Will Eisner with the script and art. The Who's Who lists Henkel as creator, writer and artist for the strip. Jim Amash and Mike Kooiman, in the Quality Companion, categorically state that The Sword was created by Henkel.

Henkel himself said, in Alter Ego #48, that super-heroes didn't interest him. He was more into adventure stories, like those in the movies; he liked realism. Perhaps this was why Carter appeared in costume as The Sword for only a very short time. Added by Craig Delich 2014-1-3.

[The Origin of Plastic Man] (Table of Contents: 6)

First Line of Dialogue or Text
From time to time the comic world welcomes a new sensation!
Genre
superhero; humor
Characters
Plastic Man [Patrick "Eel" O'Brian] (introduction, origin, reformed villain); un-named monk; Skizzle Shanks (villain); Skizzle Shank's mob (villains)
Synopsis
While escaping from a crime scene, Eel O'Brian has a vat of acid dumped on his head, giving him the ability to stretch his body. Eel decides he doesn't want to be a criminal anymore and uses his newly found powers to capture his former partners in crime.
Reprints

[The Redemption of Steele Kerrigan] (Table of Contents: 7)

Genre
detective-mystery
Characters
Steele Kerrigan (introduction, origin); Anne (introduction); un-named prison warden; Spike (villain); Torpedo (villain)
Synopsis
Imprisoned for having taken the rap for a gang of robbers he was working as a lookout for, Kerrigan saves the life of the warden and is paroled. But he is quickly approached by Spike and his gang, who kidnap Betty and manage to convince the authorities that Kerrigan was in on another job, the same day he was released.
Reprints

[The Coming of the Phantom Lady] (Table of Contents: 10)

First Line of Dialogue or Text
This the Drip residence?
Genre
humor
Characters
Dewey Dip (introduction); Mr. Drip; Mrs. Drip; Lulu (Dewey's girl)
Synopsis
Dewey gets a letter from the government informing him that he has been drafted.
Reprints

[The Origin of the Human Bomb] (Table of Contents: 12)

A black and white restoration/homage to this story by Jack Cole is printed in Golden-Age Men of Mystery (AC, 1996 series) #12.

Even though the Who's Who doesn't list Gustavson as a writer of the strip, Mike Kooiman and Jim Amash state in the Quality Companion that he created the strip and wrote it, so the question mark with the script credit has been removed by Craig Delich 2013-1-18. Also verified by Gustavson's son, Terry Gustafson.