Distributed to newsstands in June 1960. This issue includes 10 pages of paid advertisements (pages 2, 9, 15, 19, 25, 27, 33-36 of comic including inside front cover, inside back cover and back cover); pages of comic not numbered. All new stories in this issue are narrated in the first person.
On sale date as given in the copyright application as listed in the Catalog of Copyright Entries, Periodicals, July-December 1960, page 345, registration number B849997. 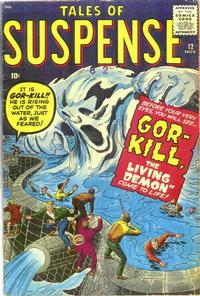 I Alone Know the Dread Secret of Gor-Kill, the Living Demon! (Table of Contents: 1)

Job Number
T-849
First Line of Dialogue or Text
It is the demon--Gor-Kill!!
Genre
horror-suspense
Characters
Gor-Kill; Hans Grubnik
Synopsis
A gaseous alien comes down to Earth and inhabits a dam of water to harass local villagers. The village loafer realizes that the alien is using the water in the dam to embody itself and steals dynamite in order blow up the pass before the alien can reach the sea. The loafer succeeds, but is imprisoned for stealing the dynamite.
Reprints
Keywords
Krakow Dam

Vial of Inspiration (Table of Contents: 2)

Job Number
J-628
First Line of Dialogue or Text
It happened when Gus Harris was an apple-cheeked youngster with...
Genre
fantasy-supernatural
Characters
Gus Harris; Mr. Peters; Mrs. Peters
Synopsis
A boy without a family is given a vial filled with music, but squanders the inspiration of it.
Reprints

Text story with illustrations. Text story is pages 8, 26 of comic (pages of story not numbered).

Those Who Lurk Below! (Table of Contents: 3)

Job Number
T-853
First Line of Dialogue or Text
It is a small foreign island in the ocean, during the last century!
Genre
science fiction
Characters
Pierre; Kragok
Synopsis
A sadistic jailer buys a book detailing an alien civilization that has retreated below the Earth in order to avoid surface climate change in order to torment his prisoner with false hope of escape. The prisoner finds the book and believes the story and later he finds a working digger to bring him down to the aliens below who welcome him. The astonished jailer spends the rest of his life unsuccessfully attempting to locate another working digger.
Reprints
Keywords
earth digger

The Monster in My Cellar! (Table of Contents: 4)

I Met the Thing on Midnight Island! (Table of Contents: 5)

Job Number
T-847
First Line of Dialogue or Text
Even now I can hardly believe it...
Genre
science fiction
Characters
Rick Jordan
Synopsis
A sailor finds a note from a castaway, but on the island named he finds only a strange creature. When an alien ship arrives to pick up the creature, he realizes that it was a castaway.
Reprints
Keywords
Midnight Island