"Movie Classic" on cover. Adapted from the 1960 movie "The Story of Ruth".

No month is given on the cover or in the indicia. Based on the copyright dates of this issue and others in the series released around the same time, one can determine that this issue was published with other Four Color issues bearing a "September-November 1960" cover date.

On-sale date from 1960 Books and Pamphlets, Copyright Office, Library of Congress.
This issue has variants:

The Story of Ruth (Table of Contents) 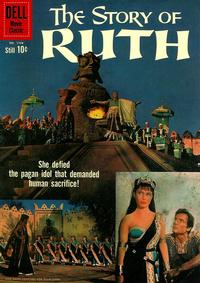 The Story of Ruth (Table of Contents: 1)

The Story of Ruth (Table of Contents: 2)

Prophets of Israel (Table of Contents: 3)

Inside back cover; black and white. Script submitted on May 21, 1960. Script credit provided by David Porta from "Gaylord Du Bois's Account Books Sorted by Title / compiled from the original account books by Randall W. Scott" (1985).