August, 1941. Number 3. Liberty Scouts Comics is published bi-monthly by Comic Corporation of America, 215 Fourth Ave., New York, N. Y. Entered as second class matter February 20, 1941 at the Post Office at New York, N. Y., under the Act of March 3, 1879. Single copies 10c (15c in Canada). Yearly subscription 60c in the U. S. A. (other countries 85c). Copyright, 1941, by Comic Corporation of America. Contents must not be reproduced without permission. No actual person is named or delineated in this fiction magazine. Printed in the U. S. A. 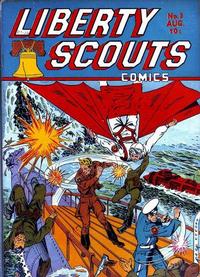 First Line of Dialogue or Text
I demand a recount!
Genre
humor

Four single-panel humor cartoons. According to Jerry Bails' Who's Who, Ray Houlihan scripted his fillers and his other Centaur stories.

First Line of Dialogue or Text
Mighty Mars, god of war, dissatisfied with the progress of the aggressor...
Genre
superhero
Characters
Man of War; Karl Steel

Henry Andrews disputes the previous Paul Gustavson pencils/inks credit here. While a number of Man of War's poses are similar, compared to the previous story the faces are different, the figures are less detailed and fluid, and the action is less dynamic. The flaming sword is rendered with a different effect, the explosion marking Man of War's appearance is less detailed, and the ink line is much heavier throughout the story.

Jim Vadeboncoeur, Jr. confirms via email that this is definitely not Paul Gustavson, nor any Gustavson that he knows.

First Line of Dialogue or Text
I'll admit I don't know a thing about a car
Genre
superhero
Characters
The Fire-Man [Jim]; Nancy

Jerry Bails' Who's Who confirms that Filchock scripted his Fire-Man stories.

Jerry Bails' Who's Who confirms that Kaliff scripted his own fillers.