Distributed to newstands in August 1960. This issue includes 10 pages of paid advertisements (pages 2, 9, 15, 19, 25, 27, 33-36 of comic including inside front cover, inside back cover and back cover) ; pages of comic not numbered. All new stories in this issue are narrated in the first person unless otherwise specified.

Distribution date from Joseph Marek's Marvel Comics Group history website. It should be noted that an August distribution date means that the comic cover date is four months later, which is an unusually long lead time; one copy seen has "10/3" as a newsstand date marked on the cover, which fits more with the usual three month lead time.

Goliath! The Monster That Walks Like a Man! (Table of Contents) 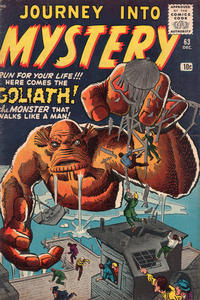 Job Number
T-930
Genre
science fiction
Characters
Goliath; Mr. Baxter; Charlie
Synopsis
An advertising man tricks an advance agent of a proposed invasion from Atlantis into returning to Atlantis by building a mannequin even larger than Goliath and threatening to wage war with his people for the surface of Earth.
Reprints

Text story with illustrations. Art credits from Journey Into Mystery #44 entry. Text story is pages 8, 26 of comic (pages of story not numbered).

I Was Trapped by the Mole Men! (Table of Contents: 3)

Job Number
T-927
Genre
science fiction
Characters
Sir Norman Ramsay; Blake
Synopsis
A snobbish mine owner is captured by subterranean creatures and kept in a zoo until the mine foreman rescues him. The experience teaches him to treat his employees with respect.
Reprints

Narrated in the first person. Job number from Dr. Michael J. Vassallo via the Atlas/Timely discussion group. Story is pages 12-14, 16-18 of comic (pages of story numbered 1 to 5, last page not numbered).

The Dangerous Doll (Table of Contents: 4)

Job Number
T-926
Genre
science fiction
Characters
Timothy Jones; Cathy Jones
Synopsis
A poor man finds a doll in the field and gives it to his lame daughter. What he doesn't know is that the doll actually moves and talks. When he's gone the doll asks the girl for food as the "doll" is really an alien child that's gone off exploring other planets without his parents' supervision. When his parents do arrive, he asks the father to reward the girl for her kindness and he cures her leg and leaves behind a gold bar.
Reprints

I Took a Journey Into Fear! (Table of Contents: 5)

Job Number
T-944
Genre
horror-suspense
Characters
Otto Bruger
Synopsis
A man wants to build a time machine, but his colleagues say it is impossible. He works in secret and murders one of them to get the equipment that he needs, but when he activates the machine he goes mad and thinks that he has succeeded.
Reprints

Narrated in the first person. Job number from Dr. Michael J. Vassallo via the Atlas/Timely discussion group. Story is pages 28-32 of comic (pages of story numbered 1 to 5).

Possible Lee script per an examination at Nick Caputo's blog: