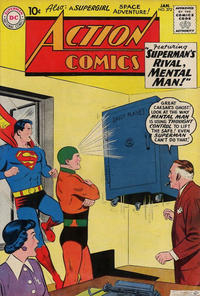 Watch for the Second Superman Annual! (Table of Contents: 4) (Expand) /

Get a Grip on Your Gripes! (Table of Contents: 6)

Genre
advocacy
Synopsis
Fred loses his temper all the time until he is confronted by Joe.

First Line of Dialogue or Text
When are you leaving for the king's castle, Sir Egbert?
Genre
humor
Characters
Sir Egbert
Reprints

The Second Supergirl! (Table of Contents: 9)

Genre
superhero
Characters
Supergirl [Linda Lee]; Marvel Maid [Lea Lindy] (origin); Marvel Man [Ken Clark] (origin); Superman
Synopsis
Supergirl travels to an Earth-like world to use her super-powers publicly to prove to Superman that she is ready to be revealed to the real world. On this world she discovers Marvel Maid, who has powers like Supergirl but is able to act freely, and Marvel Man who has powers like Superman but must hide his abilities.
Reprints
Keywords
Fortress of Marvels; Fortress of Solitude