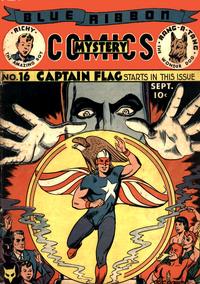 Genre
superhero
Characters
Mr. Justice [Prince James]; Satan (villain); Adolf Hitler (villain); Boering (villain, death); the Green Ghoul (villain, introduction)
Synopsis
A swarm of death-dealing bombers soars towards the capital of Kurtey, and Mr. Justice takes Field Marshal Boering along to let him have a good look at the bombing. The corpulent air marshal is given a formula to protect him from immortals (Mr. Justice as a ghost qualifies), and when he is slain by his own bombers, Mr. Justice confronts the Dictator who tells him about this new monster unleashed on America: a three-eyed scaly chap devoted to "committing murder and atrocity as fast as his wretched mind can conceive of new plots".

The story's a bit unclear on whether the Ghoul is supposed to be the dead air marshal or not.

[The Confession of Lucky Leonardo] (Table of Contents: 4)

[The Kidnapping of King Netto] (Table of Contents: 5)

Originally credited Joe Blair, but he is only a writer and editor. Compare with Storm's story in Hangman #19, with long and lively inklines. He is credited on this feature by Jerry Bails' Who's Who.

[The Pinball Evidence] (Table of Contents: 9)

[Scouting Mission On the Suez Canal] (Table of Contents: 10)

[The Origin of Captain Flag] (Table of Contents: 12)

Genre
superhero
Characters
Captain Flag [Tom Townsend] (introduction, origin); Yank (introduction, an eagle), John Townsend (introduction, death); President Franklin D. Roosevelt; J. Edgar Hoover (FBI head); The Black Hand (villain, introduction)
Synopsis
The Black Hand, attired in a monk's robe with a large black hand in a circle emblazoned on the front and back, his face deathly pale and dark ringed eyes, and a clawed, diseased right hand that can kill when it draws blood. Unfortunately, when he kidnaps young Tom Townsend in an effort to force his father to impart the secret of a new bomb sight, he sets in motion the events that create his most implacable foe: Captain Flag.
Reprints