Distributed to newstands in March 1964. This issue includes 10 pages of paid advertisements. 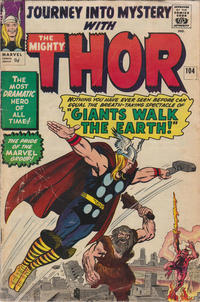 Job Number
[X-628]
First Line of Dialogue or Text
There are many different kinds of revenge!
Genre
science fiction
Characters
Dorr Rathko; Kirn; Lycia Welles
Synopsis
When an asteroid miner's partner marries the girl he loves, he tries to get revenge by stealing their asteroid, but is killed in a freak meteor shower.
Reprints

Job Number
H-367
Genre
fantasy-supernatural
Characters
Oscar Meeker; Mathilda Meeker
Synopsis
A long-suffering pushover is stuck with a battered suitcase, but finds that the case magically fills with money and spends it for him.
Reprints

Continues from last issue. Announces that only feature-length Thor stories and the Tales of Asgard stories will appear in Journey Into Mystery, starting next issue.

Tales of Asgard Home of the Mighty Norse Gods!
Genre
fantasy-supernatural
Characters
Heimdall (origin); Odin; Agnar the Fierce (introduction); Gotron, the Agile (introduction); Brimer (introduction); Trolls; Storm Giants
Synopsis
Odin has decided to appoint a sentry to the Rainbow Bridge. Agnar, Gotron and Heimdall try out for the appointment but Heimdall gets it.
Reprints

First in the Heimdall Biography series.