Distributed to newsstands in August 1960. This issue includes 10 pages of paid advertisements (pages 2, 9, 15, 19, 25, 27, 33-36 of comic including inside front cover, inside back cover and back cover); pages of comic not numbered. All new stories in this issue are narrated in the first person unless otherwise specified.
On sale date as given in the copyright application as listed in the Catalog of Copyright Entries, Periodicals, July-December 1960, page 345, registration number B861707. 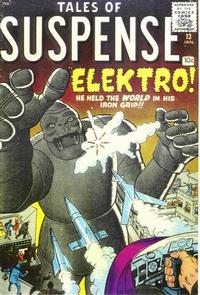 Elektro! He Held a World in His Iron Grip! (Table of Contents: 1)

Job Number
T-970
First Line of Dialogue or Text
Cringe, mortals!
Genre
science fiction
Characters
Elektro (introduction, origin); Wilbur Poole; Charlie
Synopsis
A scientist creates a computer so sophisticated that it can out think human beings. It hypnotizes the scientist into building it a huge robot body so that it can move and threaten human cities to conquer them. As it gets further from the scientist, the hypnosis fades, and the scientist regains his own will. He rushes Elektro, and enters the robot frame from a small door in its heel, and removes the power source, thus saving humanity.
Reprints
Keywords
robot

The Missing Film (Table of Contents: 2)

Job Number
J-707
First Line of Dialogue or Text
A babble of strange voices welled around Dr. Title's ears as he...
Genre
fantasy-supernatural; spy
Characters
Dr. Title; Douglas Jenks
Synopsis
A government agent retrieves a classified microfilm stolen to be given to enemy agents, and is helped by a magic bridge.
Reprints

The Demon in the Dungeon! (Table of Contents: 3)

Job Number
T-964
First Line of Dialogue or Text
It was last summer...
Genre
science fiction
Synopsis
A novelist rents a castle in Transylvania, where the locals believe a demon lives. He discovers that the creature is a lost alien child, and its parents cure his limp as a reward for helping it get home.
Reprints
Keywords
Cragmoor Castle

I Lived a Million Years! (Table of Contents: 4)

Job Number
T-954
First Line of Dialogue or Text
The scene is inside a palace in a remote Asiatic province...
Genre
science fiction
Synopsis
An Asian tyrant bleeds his subjects dry to build a suspended animation machine and avoid nuclear war. He sleeps for a million years, but when he emerges humanity has abandoned Earth and he faces a harsh and primitive world.
Reprints

When the Earth Vanished! (Table of Contents: 5)

Job Number
T-981
First Line of Dialogue or Text
On a planet far from Earth, a test is being completed...
Genre
science fiction
Characters
Goloks (extraterrestrials)
Synopsis
Tiny alien invaders decide to detonate their ultimate bomb thinking that unobserved Earthlings have gone into hiding to avoid their invasion force and end up blowing up an Earth boy's ping pong ball and themselves as they are caught in the aftershocks of the blast.
Reprints

Narrated in the third person. Story is pages 28-32 of comic (first page of story not numbered, then pages numbered 2 to 5).