On-sale date from ad in House of Mystery #107 and copyright registration.

The Film Menagerie! (Table of Contents) 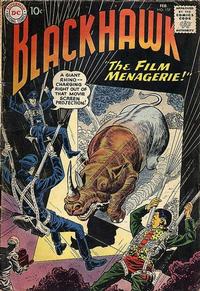 The Secret of the Blackhawk Sphinx (Table of Contents: 2)

Our American Heritage (Table of Contents: 5)

The City That Banned the Blackhawks (Table of Contents: 6)

For the Very Best in Comics Reading! (Table of Contents: 7) (Expand) /

Search in the Swampland (Table of Contents: 8)

Genre
adventure
Synopsis
In the jungles of southern Mexico, a man sets a death trap to eliminate competitors for his job.
Keywords
fireflies; jungle; Mexico; quicksand

First Line of Dialogue or Text
You're run down Robbie! What's wrong?
Genre
humor; science fiction
Characters
Robbie the Robot
Synopsis
A doctor checks out Robbie when he complains of being nervous.
Reprints
Keywords
robot

The Film Menagerie (Table of Contents: 11)

Genre
adventure; science fiction; aviation; military; superhero
Characters
Blackhawks [Blackhawk; Chuck; Hendrickson; Chop-Chop; Andre; Stanislaus; Olaf]; Beast-Maker
Synopsis
The Beast-Maker has a device that makes projected images come alive for a short period of time and is stealing films of animals for a stockpile to use to commit crimes, since he can only use each piece of film one time.
Reprints
Keywords
crocodiles; duplicates; elephant; film projector; gorilla; jets; leopards; movie film; museum; parachutes; rhino

The villain is named in only one caption, and is never called that name by any of the characters.