Creature of a Thousand Shapes! (Table of Contents) 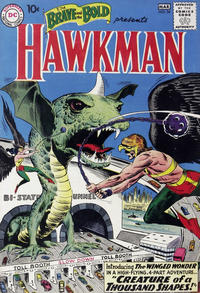 Creature of a Thousand Shapes! (Table of Contents: 2)

Our American Heritage (Table of Contents: 3)

Includes an essay by Gardner Fox on his involvement in the creation of Hawkman and a letter by Roy Thomas. Appears between page 12 and page 13 of the main story sequence.

On the page between page 18 and page 19 of the main story sequence.