This issue is a variant of The Amazing Spider-Man (Marvel, 1963 series) #11 [Regular Edition].

The Long-Awaited Return of Doctor Octopus! (Table of Contents)

Alterations on Dr. Octopus' face and Spider-Man's legs by Jack Kirby. The unaltered cover was published in various reprints, including the cover to Marvel Tales # 148. (additional information provided by Nick Caputo) 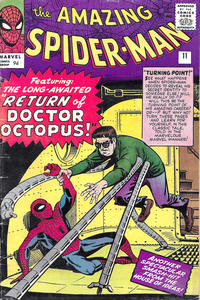 First Line of Dialogue or Text
I hate you, Spider-Man!
Genre
superhero
Characters
Bennett Brant (death); Betty Brant; Doctor Octopus [Otto Octavius]; Aunt May Parker; Spider-Man [Peter Parker]; Blackie Gaxton
Synopsis
Betty's brother has gotten himself into trouble with gambling debts and Betty is forced to help in Doc Ock's plot to break Blackie Gaxton out of prison to keep her sibling alive. Spider-Man interrupts the escape and Blackie shoots Bennett during the conflict. Gaxton is captured but Doc Ock gets away. Peter tries to comfort Betty over the loss of her brother.
Reprints

This is the first continued story.

Includes a letter from Ken Landgraph and Special Announcements Section.