First Line of Dialogue or Text
We've got the romantic reading scene all wrapped up! 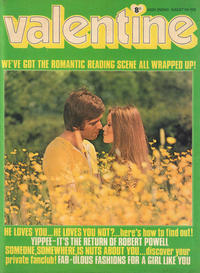 First Line of Dialogue or Text
Oh, why does everyone have to be so flipping cheerful!
Genre
romance
Characters
Jan; Willy; Rod
Synopsis
Rod ended it with Jan and she is is frustrated by happy people. She thinks of gloomy Willy, who also had a relationship breakup. But Willy is now happy with a new girl and offers to take Jan to Rod to make up. As Jan rides on the back of Willie's bike, she reflects on her relationship and talks with Willy about his. Jan realises she is the jealous type and that she will not find happiness with Rod—the relationship's stale and trust gone. She gets off Willy's bike, tears up the letter she intended to give Rod and heads home.

Just the Job for You! Women's Services (Table of Contents: 6)

Love on Location (Table of Contents: 8)

First Line of Dialogue or Text
My boyfriend had caught the holiday movie bug, but the result was more like a horror film --
Genre
romance
Characters
Mick Jones; Debbie Martin
Synopsis
Debbie is sick of Mick filming every aspect of their holiday, especially retakes of spontaneous events. It is so unromantic! Heading back, she's too angry to even sit with Mick. She doesn't want to go to Mick's showing, but her friends insist. She arrives late to find no one but Mick—everyone else has laughed and left. The whole film is blank except one shot of Debbie and Mick kissing. Mick remembers what it was to love Debbie. She forgives him.

Artist's credits are based on information provided by David Roach at http://deskartesmil.blogspot.com/2012/01/purita-campos-en-uk.html.

Would You Turn Up in Trousers? (Table of Contents: 10)

Romance Wrecker No 1 Rumours That Ruin a Romance… (Table of Contents: 12)

At First Sight…Second…or When? (Table of Contents: 13)

First Line of Dialogue or Text
Was it love at first sight for Greg and Penny?
Genre
romance
Characters
Greg Masters; Penny Tate; Mrs Tate
Synopsis
Greg reveals he fell in love at first sight and asks Penny if she did too. In fact, she initially though Greg was showing off and disliked him. He kept trying to impress her. Penny's mother encouraged her to give him a chance. They then went out regularly once a week and he was a perfect gentleman. But Greg wants to know if there was a special moment when Penny knew she was in love. She tells him of the night she was late for a movie and saw him helping after a little girl. She fell for him at a time when he wasn't trying to impress her.
Reprints

Robert Powell - Just Happy in His Job! (Table of Contents: 15)

First Line of Dialogue or Text
It wasn't Lyn's fault, I want that clear.
Genre
romance
Characters
Sandie; Lyn; Glen Hewitt
Synopsis
Lyn is with Sandie and Glen wherever they go. Sandie has no time alone with Glen and feels increasingly jealous. Then Lyn decides to stay longer -- she had a sad breakup and wants time to get over it. Sandie is convinced Lyn is trying to ruin her relationship. She sets up a test and leaves Glen and Lyn to an evening together. When they return, Sandie sees them kiss. She realises she was right and decides she won't give up Glenn without a fight.
Reprints

Someone, Somewhere Is Nuts about You…Discover Your Own Private Fan Club! (Table of Contents: 18)

I've Got Something to Tell You, Joanna… (Table of Contents: 19)

"A Story of a Girl in Today's Young World".