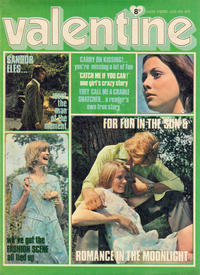 The Status Quo - Nowhere Near Quitting! (Table of Contents: 3)

First Line of Dialogue or Text
They were just to strangers on different buses, but at least Carol had her dream…
Genre
romance
Characters
Carol Clark; Johnny
Synopsis
Each day on the way to work, Carol sees a gorgeous guy on a bus heading in the opposite direction. She dreams of what might be and decides to breath on the window and write a message to him. She and Johnny then exchange a brief message each day. Then comes a morning she doesn't see him and a week goes by before he pulls up in a car and offers Caroline a lift. He is on his way to pick up his fiancée. Carol realises she has created a dream from a boy being friendly and vows off romances on buses...briefly.

Carry On Kissing (Table of Contents: 5)

They Call Me a Cradle-Snatcher (Table of Contents: 6)

First Line of Dialogue or Text
It's no use, Lyn, I'll do anything to keep him, no matter what happens!
Genre
romance
Characters
Sandie; Lyn; Glen Hewitt; Rod
Synopsis
Glen suggests they all go out, but Sandie insists they stay in--she has invited Lyn's old boyfriend Rod to show Glen that Lyn has already dumped a boyfriend. Sandie mentions Rod to Lyn and she becomes very upset. Lyn says that seeing Sandie and Glen's love made her realise what she's lost. Lyn has been crying on Glen's shoulder. Then Rod arrives and Sandie panics about Glen's reaction to her nasty intentions inviting Rod, but the couple are happy to be together again and make up. Glen and Sandie kiss too.
Reprints

This is the final part of this ongoing serial.

What's with This Draw-String Thing? (Table of Contents: 10)

Genre
romance
Characters
Doctor Greg Parker; Nurse Kay Denton
Synopsis
On her first day in the wards, Kay is sent to emergency with her heart-throb Doctor Parker. All goes well initially, but Kay falls apart when a young girl arrives dying. Embarrassed and planning to quit her job as a failure, Parker gives her a lesson on the realities of hospital work.
Reprints

Just the Job for You! Telephonist (Table of Contents: 14)

Meet the Man of the Moment - Sandor Eles (Table of Contents: 15)

First Line of Dialogue or Text
What a bloke! I'd give my back teeth to charm the birds like he does!
Genre
romance
Characters
Guy Prentis; Jason; Cara Walsh
Synopsis
Jason can chat up women, so he lines up a girl for his shy mate Guy. When that match ends quickly, Guy lies to Jason about a follow up date. So, with nothing to do Saturday, Guy goes to the library. There he literally runs into Cara. She's as nervous as Guy, but they're comfortable together. When Jason turns up, he takes over. Guy gives up and sneaks away. Cara follows him, admitting she was fascinated with Jason—because of the way he can chat up a girl, but not really talk to a girl as Guy does.

Artist's credits are based on information provided by David Roach at http://deskartesmil.blogspot.com/2009/06/luis-garcia-en-uk.html.

This Is What Dreams Are Made Of… (Table of Contents: 18)

First Line of Dialogue or Text
I'm sad, when I remember you…

This poem is on the back cover.