Space-Island of Peril! (Table of Contents) 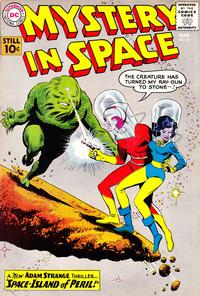 Space-Island of Peril! (Table of Contents: 2)

Information for this sequence from Arthur Lortie.

The Brave and the Bold; Hawkman / promo (ad from the publisher) / 1 page (report information)

Beauty and the Robot! (Table of Contents: 7)

Genre
science fiction
Characters
Edward "Doc" Emerson; Steve Crandall; Irilene; Robotrol man
Synopsis
In the first contact with an alien ship, two explorers discover hibernation chambers: one with a beautiful girl, the other with a robot - who shouldn't need to hibernate. Waking the girl, she claims to be a space policewoman, while the robot is a prisoner. But her odd queries about "Earth's rarest treasures" raise red flags as the explorers escort her to her home planet...
Reprints

Two panels with text regarding moons Phobos, Deimos, and Amalthea.

Letters of comment from Jerome Clark; and Bob (unsigned)

First Line of Dialogue or Text
With the exception of about 30 stars...
Genre
non-fiction; math & science

Who Caught the Loborilla? (Table of Contents: 12)

Genre
science fiction
Characters
The Star Rovers (introduction) [Homer Glint; Karel Sorensen; Rick Purvis]
Synopsis
Three famed adventurers compete for a $10,000 prize to capture the one-and-only loborilla on a distant planet. Each one captures the unique creature (they think) and claims the prize. But their varied accounts conflict, and soon all three are surprised about who really caught the beast!
Reprints
Keywords
Star Rovers

1) Pencil and inks credits, and page count confirmed from Julius Schwartz's editorial records, provided by DC Comics. 2) Sid Greene's usual depiction of Julius Schwartz as a character occurs twice here, on page two panel five and page seven panel five. 3) This story's narrative conceit is similar to that of Akira Kurosawa's 1950 film Rashomon, in which the same incident (in this case, the capture of the Loborilla) is recounted by four different characters (including the Loborilla) as well as four different perspectives. Ingeniously, writer Gardner Fox also makes all four accounts internally consistent. 4) This is the first "Star Rovers" story, although their group name "Star Rovers" does not appear. 5) The Rovers are, oddly, not a team, because, in every story, all three are in competition for some prize or goal. 6) The Rovers continued in Mystery in Space and later switched to Strange Adventures.