A price variant intended for distribution in the United Kingdom, with replaced cover price.
This issue is a variant of Astonishing Tales (Marvel, 1970 series) #9.

Man Vs. Beast-- In A Savage Land! (Table of Contents) 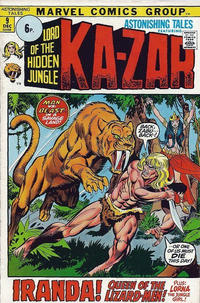 The Legend of the Lizard Men! (Table of Contents: 1)

Job Number
633Z
Genre
jungle; superhero
Characters
Ka-Zar [Kevin Plunder]; Zabu; Iranda (villain, introduction, death); Lizard Men (introduction); Lowani
Synopsis
When Ka-Zar goes in search of missing women and men from a local village, he finds the woman, Iranda and the Lizard Men. She takes him to her castle where he sees one of the missing women. When he tries to rescue her, the Lizard Men attack him. He is barely able to escape but when he does, he takes Iranda's crown with him. With her crown gone, at moonrise her enchantment wears off and she becomes a Lizard being. After she dies, her enchantments fade and the Lizard Men turn back into the missing warriors from the village.
Reprints

Tom-Toms of Danger! (Table of Contents: 2)

Job Number
G-96
Genre
jungle
Characters
Lorna, the Jungle Girl; Greg Knight; Mikki; Chief Akabi; Moki
Synopsis
Moki uses the sound of Tom-Tom's to drive all of the Gabu into a war frenzy so that he can take over the jungle.
Reprints

This issue reprints only the first four pages of the original story. Job number comes from the Atlas Tales website. According to George Olshevsky's Marvel Comics Index #7B some of the artwork is retouched in this reprint.

Job Number
G-97
Genre
jungle
Characters
Lorna, the Jungle Girl; Greg Knight; Mikki; Subu; Alexei; The Green Opal
Synopsis
Alexei and Subu surrender when The Green Opal warns them that if they don't stop abusing it's name and power it will pursue them to the ends of the earth.
Reprints

This issue only reprints the last two pages of the original story. Job number comes from the Atlas Tales website. According to George Olshevsky's Marvel Comics Index #7B some of the artwork is retouched in this reprint.