The Road Back! (Table of Contents)

Hawkeye, Scarlet Witch and Quicksilver faces are taken from different sources. Hawkeye's face is from Tales of Suspense # 57, page 5; Quicksilver and the Scarlet Witch are lifted from Strange Tales # 128, page 3. Sol Brodsky may have touched up or redrawn the faces, particularly those of Wanda and Pietro. Info per Nick Caputo, February 2016. 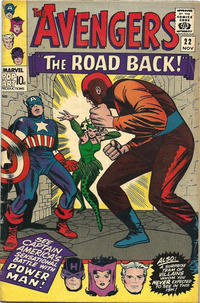 The Road Back (Table of Contents: 2)

First Line of Dialogue or Text
Having been framed by Power Man and the Enchantress, the angry Avengers are under orders to disband, after being declared public menaces by the city council...
Feature Logo

The Mighty Avengers!
Genre
superhero
Characters
The Avengers [Captain America [Steve Rogers]; Hawkeye [Clint Barton]; Quicksilver [Pietro Maximoff]; Scarlet Witch [Wanda Maximoff]]; Masters of Menace [Bruto the Strongman [Bruce Olafsen]; Clown [Elliot Franklin]; Great Gambonnos; Human Cannonball [Jack Pulver]; Princess Python [Zelda DuBois]; Ringmaster [Maynard Tiboldt]]; Enchantress [Amora]; Power Man [Erik Josten]
Synopsis
Forced to disband the Avengers, Hawkeye, Quicksilver, and Scarlet Witch cannot find work until the Ringmaster hires them. Unable to control them, he tells the police that they tried to rob his Circus. Suddenly the three are on the run. While working on his own, Captain America is able to pin the whole scheme on Enchantress and Power Man. Enchantress bails back to Asgard. Power Man, deprived of his lady love, surrenders. The City Council withdraws its order: the Avengers may assemble again. But Captain America has had enough of Hawkeye and refuses to rejoin.
Reprints

He's Looking for People Who Like to Draw (Table of Contents: 16) (Expand) /