On-sale date from ad in Action Comics #39 and copyright registration. 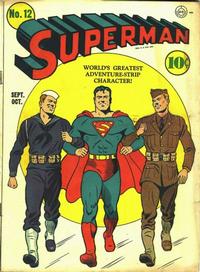 Genre
superhero
Characters
Superman [Clark Kent]; Lois Lane; Perry White; Niles Grant; Nan Wilson; Carl Bogart (villain, introduction)
Synopsis
For doing such a great job, Lois and Clark are given a cruise vacation aboard the "Grenodier", where they meet Nan Wilson, who has inherited Pogo Island, and she invites the two to visit her island. But the superstitious natives believe that Nan is a witch and several attempts are made on her life. Superman, however, discovers that the island is being used as a base for submarines belonging to a foreign nation which prey on merchant marine vessels in neutral waters.
Reprints

First Line of Dialogue or Text
Greetings again, Members! There are many things that guide us in the practice of our daily lives and one of these is Responsibility.
Characters
Superman [Clark Kent]
Reprints

Superman discusses "responsibility" with his club members, there is Superman Secret Code message in Code Mars No. 3, and a coupon available for readers to join the Supermen of America.

[The Suicide Murders] (Table of Contents: 5)

[Men of Iron and Clear for Action!] (Table of Contents: 7)

Genre
crime
Characters
James Crewe (villain); Ames; Smith (a detective)
Synopsis
Old Ames, bookkeeper for the Chalmers Real Estate Company, was puzzled about a robbery made by two armed thugs, and the reason for that puzzlement could only mean one thing: the robbery was an inside job!
Reprints

Profile of Stephen Decatur's famous words, "Our Country, Right or Wrong!" given as a toast.

First Line of Dialogue or Text
At least we're lucky to run out of gas so near this nice big filling station!
Genre
humor
Reprints

Genre
superhero
Characters
Superman [Clark Kent]; Lois Lane; Perry White; Dudley Barnes (death); Allen Masters (villain, death); Stephen Cardine (villain, reforms, death); Lex Luthor (villain); Bill Grimes (villain, reforms, death); von Harbitz (villain, reforms, death)
Synopsis
Lois and Clark excitedly listen to a story by a scientist, who tells them of a forced visit he made to Baracoda Island, where giant animals were artifically being breeded. However, when he discovered that he had become part of a plot to use the animals to conquer the world and set up a scientific dictatorship, he wanted no part of it and escaped to warn the outside world.
Reprints