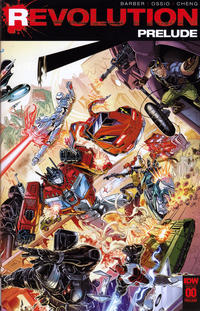 Synopsis
A short explanation of the intent of the Revolution series: to combine all of the various Hasbro licensed characters' universes into a single comic universe.

Genre
superhero
Characters
Action Man (cameo); General Joe Colton [G.I. Joe]; General Hawk; Scarlett; Transformers [Optimus Prime; Autobots; Megatron; Decepticons]; Cobra; Director Miles Manheim [Miles Mayhem]
Synopsis
Background on the battles between the Transformers and the G.I. Joe corps' part in the history. The remains of the corps has captured a live but broken Transformer and is preparing to use it to disrupt total destruction of Earth due to a fission explosion of all the Ore-13 in the planet.