Distributed to newsstands in January 1961. This issue includes 10 pages of paid advertisements (pages 2, 9, 15, 19, 25, 27, 33-36 of comic including inside front cover, inside back cover and back cover); pages of comic not numbered.
On sale date as given in the copyright application as listed in the Catalog of Copyright Entries, Periodicals, January-June 1961, page 148, registration number B878950. 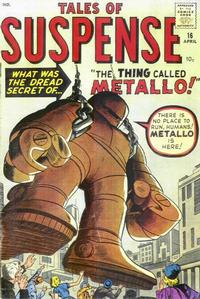 The Thing Called Metallo!, Part One (Table of Contents: 1)

Job Number
V-110
First Line of Dialogue or Text
Our tale begins with the midnight stillness of a prison being...
Genre
science fiction
Characters
Metallo [Mike Fallon]
Synopsis
An escaped convict tests a radiation-proof suit under a fake name. When he realizes the suit’s power, he uses it to go on a crime spree. When he finds that he has a disease only treatable by radiation he stays in the suit to die rather than be captured.
Reprints
Keywords
octopus

The Holiday (Table of Contents: 2)

Job Number
G-790
First Line of Dialogue or Text
Zed was as excited as any youngster in Unitia on that...
Genre
science fiction
Characters
Zed; Zack; Zed's mother
Synopsis
A boy celebrates the turn of the millenium with a special trip to the moon.
Reprints

Text story with illustration. Text story is pages 8, 26 of comic (pages of story not numbered). This story is set at the end of the 29th century. The first page is split with the statement of ownership.

Job Number
V-109
First Line of Dialogue or Text
They're comin' closer!
Genre
horror-suspense
Characters
John Larson; Dunstan Kromm
Synopsis
A man scoffs at his friend’s idea that a nightmare could last forever, causing him to storm out, drive off the road and die. He wakes up having the same conversation, in a nightmare loop.
Reprints

Narrated in the second person. Story is pages 20-24 of comic (pages of story numbered 1 to 5).

The Hands of Hogarr! (Table of Contents: 6)

Job Number
V-116
First Line of Dialogue or Text
I warned him, but he wouldn't listen to me!
Genre
horror-suspense
Characters
Carl Gruko; Hogarr; Inspector Baynard
Synopsis
A fugitive forces a gypsy to give him a new face, but he is captured because it is the same face as his pursuer.
Reprints