Cover is taken from splash page of story. 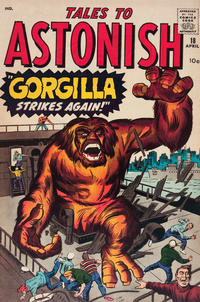 Job Number
V-122
First Line of Dialogue or Text
In the October issue of Tales to Astonish we gave you the story of Gorgilla!
Genre
horror-suspense
Characters
Gorgilla; Scotty; Anne
Synopsis
Gorgilla stows away on a ship to America to contact the human race, but is met with fear and violence in New York. He stumbles across some communist spies and stops an assassination, but is killed by the military out of fear.
Reprints

Story is presented in two parts.

The Stranger (Table of Contents: 3)

Job Number
G-76
First Line of Dialogue or Text
They say there are stranger things happening on this old Earth of ours than one is...
Genre
fantasy-supernatural
Synopsis
A painting of a Napoleonic victory parade is mysteriously linked to an eccentric inhabitant of modern Paris.
Reprints

Job Number
V-105
First Line of Dialogue or Text
A strange egg rests on the ground--shunned by both plant and animal life!
Genre
science fiction
Characters
Monsteroso
Synopsis
A creature hatches from an egg and imagines itself lord of all it surveys, but it is suddenly drowned, as it is only a microbe in a scientist's culture.
Reprints

This story is an altered retelling of "Earth Will Be Destroyed!" drawn by Steve Ditko in Tales of Suspense (Marvel, 1959 series) #9 (May 1960). Stan Lee is given a speculative writing credit based on his authorship of another retelling of the same story. Nick Caputo also suspects Lee's scripting as examined in his blog: http://nick-caputo.blogspot.com/2011/11/who-authored-ditko.html

Robot on the Rampage! (Table of Contents: 6)

Job Number
V-111
First Line of Dialogue or Text
The time... a few years in the future!
Genre
science fiction
Synopsis
A robot stationed at a lighthouse rebels against his human master and the man manages to lock the robot outside where the food supply is stashed, but thanks to the salty sea air, it rusts completely within a mere matter of hours rendering it harmless to carry out its threats.
Reprints